The below is an article from Riviera Maritime, published November 26, 2019.
Written by Craig Jallal.

Bow Orion is one of four stainless-steel chemical parcel carriers being constructed at Hudong-Zhonghua Shipbuilding in China for Odfjell. The design is an organic development of Odfjell’s historical chemical carrier fleet.

Odfjell of Norway has long been a pioneer in the chemical carrier sector. It was the first company to take delivery of a chemical carrier with stainless-steel cargo tanks when Lind was launched in 1960. Nearly 60 years later, the Hudong-49 series marks a new phase of chemical carrier design at Odfjell.

The development of the wholly IMO II Type chemical parcel carrier was driven by customer demand and a desire to enhance the Odfjell ‘Round-the-World’ service, which predominantly features the USA to Asia leg, specifically to customers in China and surrounding regions. The need for a new series of super-segregators was also driven by the ageing of the Odfjell fleet – some of the older vessels may soon start to fall foul of age limits set by charterers.

Having acknowledged a demand for 30-plus segregation Type II stainless-steel tankers, the next decision was where to build the vessels. From a shipyard’s point of view, having a series of stainless-steel chemical carriers on the portfolio is a highly desirable demonstration of its skill set. Another attraction for any shipyard is the level of technology transfer available from working with experienced operators of chemical carriers. Odfjell falls into this category and is still operating stainless-steel chemical carriers built in 1994/1995 at Kvaerner Govan (now BAE Systems Surface Ships Govan), STX Floro (1996-2003) and Stocznia Szczecinska Nowa (2003-2007), all yards with a well-regarded reputation for producing this type of tonnage.

Odfjell conducted a beauty parade of shipyards with the ability to build chemical carriers to the required specification. Hudong–Zhonghua Shipbuilding had experience of constructing stainless-steel cargo tanks. It is the only shipyard in China to be producing large LNG carriers, and had constructed the Stolt Nielsen series of 38,000 dwt 43-tank stainless-steel parcel tankers of 44,000 m3 capacity led by Stolt Pride in 2016. As a subsidiary of the China Shipbuilding Group Corporation, the yard also had the financial backing required (guarantees and funding) for the project.

One important element in the choice of Hudong–Zhonghua was its relationship with the supplier of the stainless steel. Each Hudong-49 vessel is going to require about 3,000 tonnes of high-quality duplex type stainless-steel material of 2205 quality. 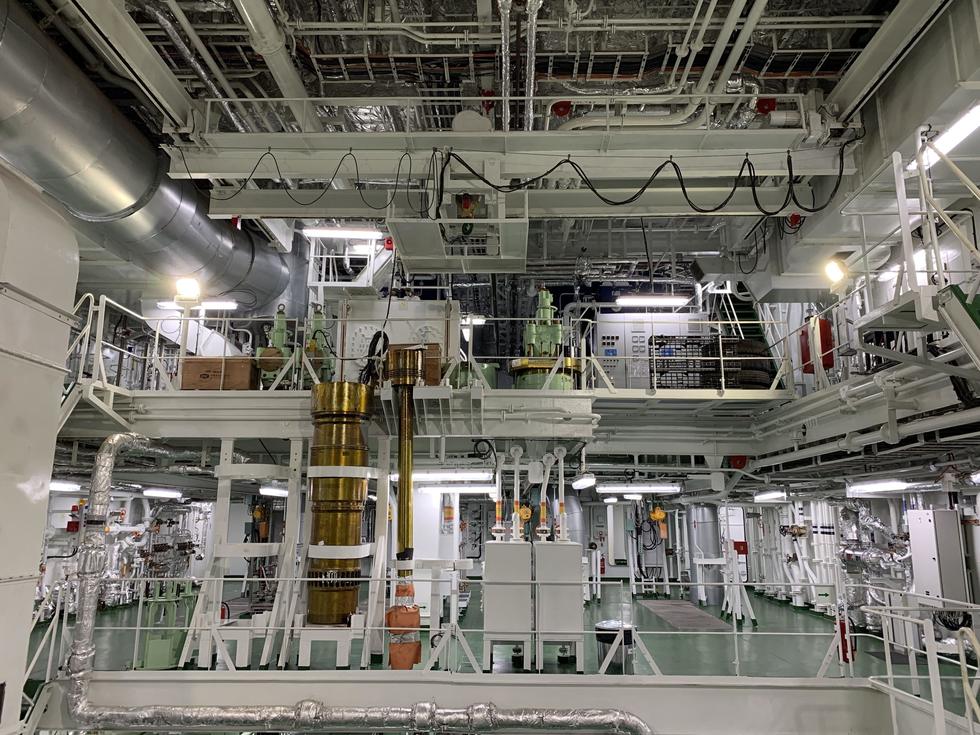 The main characteristic is the IMO type II chemical-capable cargo tanks, with sizes ranging from 595 m3 to 2919 m3. The tank sizes have been optimised according to the typical parcel sizes of the cargoes, which will increase the utilisation of the ship. As Odfjell’s chief operating officer Harald Fotland explained:

“The super-aggregator concept is about having the flexibility of cargo space to avoid being ‘tanked-out’ and unable to fulfil a customer’s requirement.”

The cargo tanks are dimensioned to carry cargoes with specific gravity in the range from 0.6 to 2.2, and with cargoes up to a temperature of 80°C. Due to the high volume capacity the ship is well suited for carriage of CPP’s as an MR ship, suitably prepared with a common cargo manifold in compliance with OCIMF requirements. Some of the tanks totalling 18,000 m3 are also arranged for carriage of Propylene Oxide, arranged with appropriate overpressure and cooling capabilities.

Each cargo tank is made of solid stainless steel, produced as a special order by Chinese manufacturer Taiyuan TISCO-Daming. The specification required by Odfjell was very demanding. The duplex stainless steel had to be flawless, with strict requirements of corrosion resistance, mechanics and welding. Maximum Ra-value for surface roughness of the plates is required to be less than 5 μm, and no imperfections are allowed on both sides of the stainless-steel plates.

The use of Taiyuan TISCO-Daming-produced duplex stainless steel was a breakthrough for the steel producer. Until the Odfjell contract, foreign shipowners ordering chemical carriers in China would generally specify foreign-produced stainless steel for the cargo tanks. However, Odfjell had earlier built ships with Taiyuan TISCO-Daming stainless-steel material for the former 9,000 dwt series, built at Chuan Dong shipyard in China.

Each cargo tank is fitted with a deep-well centrifugal-type cargo pump, with its own segregated piping system and cargo crossover manifold. The pumps are supplied by Frank Mohn AS (Framo) and are hydraulically operated. Hydraulic oil is circulated out in a ring line to the various pumps from the hydraulic power pack giving a maximum pump capacity of 3,600 m3/hr of cargo.

Kongsberg supplied an integrated cargo-control system, consisting of a cargo tank-level gauging system (radar beam type), including a pressure and temperature monitoring system. Kongsberg also supplied the fuel tanks and ballast tank gauging systems. Westad valves are fitted to the cargo system and to the ballast tanks. Remote control of the valves is achieved via Scana hydraulics, consisting of a hydraulic power unit, solenoid valve and actuators mounted on the valves.

The pressure vacuum valves for the cargo tanks are supplied by Scanvent and consist of two discs: a small weight-loaded one for thermal variations during voyage and full flow valve for use during loading and special occasions. It is said to achieve zero VOC release through the unique combination of magnet power and air breaks. It is truly non-oscillating as it complies with the two-second no-metal-to-metal contact definition from ISO 15364:2007.

After extensive research for the newbuildings and for retrofits across its fleet, Odfjell chose the PureBallast 3.1 ballast water treatment system produced by Alfa Laval. The cargo heating system is supplied by Heatmaster, and the membrane-type nitrogen generator is supplied by Generon and operated with TMC compressors.

One reason Odfjell has chosen names like Framo, Kongsberg, and Alfa Laval for Bow Orion and the Hudong-49 series is familiarity. According to Mr Fotland, Odfjell has used Framo pumps for decades. “The crew and engineers know these pumps inside and out: there is no reason to change”

That is not to say that Odfjell is an overly conservative organisation. Mr Fotland reports that Odfjell approached a small Norwegian manufacturer of an innovative freshwater generator for fitment to Bow Orion. Norwater is located in a small village midway between Stavanger and Bergen and Odfjell has become one of the largest clients of its high capacity reversed osmosis system for production of fresh water. The Norwater system has a very low energy and carbon footprint and produces sufficient freshwater so that seawater is not required in the tank washing processing. 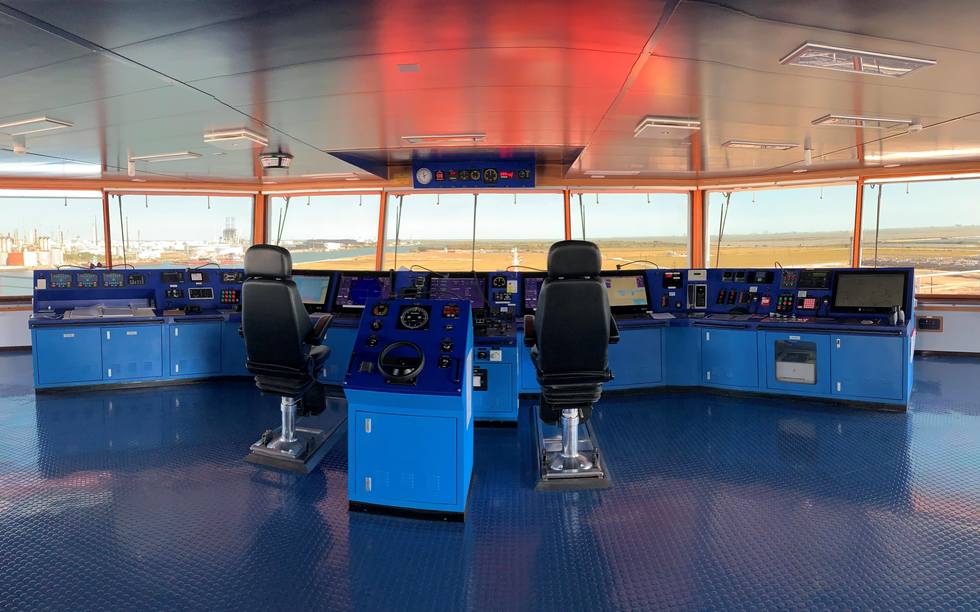 The specified maximum continuous rating (SMCR) is 7,820 kW with a normal continuous rating (NCR) of 5,083 kW (65% of SMCR). The engine, manufactured under licence in China by Hudong Heavy Machinery, drives a Zhenjiang Tongzhou slow rotating large diameter propeller. Shafting is prepared with a Wärtsilä-type stern tube system. The rudder is a BMS (Becker) high-lift design operated by a Rolls-Royce vane-type steering gear.

Bow Orion’s hull form has been optimised using a 3D computational fluid dynamics (CFD) program, proven through testing in a model test basin. The bow is not bulbous; rather it is an efficient vertical type, which gives proven stability and course keeping.

Using this set up Bow Orion will consume 14% less fuel compared to older ‘super-segregators’ in the Odfjell fleet, while offering 35% more cargo space than the company’s 40,000 m3 series. Overall, unit costs will be reduced by 32%. Odfjell has publicly stated it is not convinced by the financial arguments or the provenance of the environmental arguments supporting the use of scrubbers and one is not fitted to Bow Orion.

However, earlier reports suggested that Bow Orion or later sisters may be dual-fuelled. The MAN Energy Solutions G50ME-C9.5 engine has a hydraulic-mechanical system for activation of the fuel injection and the exhaust valves, which lends itself to being adapted to a range of fuels.

The four generator sets are driven by a MAN Energy Solutions-licensed Holeby 28/32 type engine, having capacities of 2 x 1,000 kW and 2 x 1,250 kW, built by CSSC Marine Power. The emergency generator is a CMXD – Volvo Penta unit with 260 kW capacity.

An incinerator with auxiliary systems and tanks is provided by TeamTec. Engineroom fans from Heinen and Hopman are provided with a frequency controlled system for energy saving purposes.

On deck the hose-handling crane and provision cranes are supplied by TTS, which is part of the MacGregor group. TTS also supplied the windlass and the 16 tonne mooring winches, while Tims supplied mooring ropes.

Heinen & Hopman supplied the air conditioning system, consisting of a glycol-based circulation system and a heat regeneration device for good energy efficiency. Wesco has provided the galley and laundry room equipment. The interior of the accommodation has been out-fitted with panels from Hua Nan Building Materials and furniture fitted by Shanghai Jiangnan Fulin Marine. The accommodation includes a gym for the crew.

All the electrics systems and switchboards, including the panels, alarms and controls, are from Kongsberg, integrating with the cargo-control systems, including the Kongsberg loading computer. High-speed satellite data links send the thousands of data points generated by the Kongsberg systems back to Odfjell, as increasingly customers are asking for real-time updates of the cargo operations. As with other equipment, Odfjell prefers proven ability and crew experience and all the navigation equipment, including radar, ECDIS, autopilot, echo sounder, speed log, weatherfax and display units, are single-sourced from Sperry.

Odfjell’s newbuilt chemical tanker, the 49,000 dwt Bow Orion, was tonight recognized with the ‘Tanker Ship of the Year Award’ at the Tanker Shipping & Trade Confere...

It was a milestone moment when the new 49,000 chemical tanker was launched in China on November 23rd.

A milestone is reached in Odfjell's history as we officially name our next generation of chemical tankers on July 1st 2019. When the ships are delivered to our fleet, the...