In the 16th century, Antwerp, in Belgium, was already a hugely significant and growing global port, and it was said that half of the world’s trade passed through its docks. The traders brought great wealth to the city, which was growing rapidly. In a little over 150 years, the population had risen from around 20,000 to more than 100,000. It was in this bustling atmosphere that the general cargo handler that would become Belgian terminal operator Noord Natie came into being.

Handling mostly cargoes from Northern Europe, over the next four centuries the company grew, becoming one of the biggest container operators in the Port of Antwerp. In 1950, Noord Natie Terminals began operations. Noord Natie sold its container business to the Port of Singapore Authority, with the tank terminal transferred to Noord Natie Holding.

‘In 2012 the shipping company Odfjell took a 25% share in the company. In that way we are linked to the global Odfjell network, with terminals in the US, Far East and South America’

Every terminal has a unique selling point (USP), and de Graeff is in no doubt as to NNOAT’s.

‘Our quay length. We have 2.5 km of quay and that means the occupancy rate of the jetties is very low. This quay length is unique. It has the advantage for the customer that in most cases they can immediately berth, and it also allows them to do a lot of transshipments so they can transfer shipments from their vessel to a barge or another sea going vessel,’ he says.

NNOAT commercial manager Bert Druyts adds that they have 13 berths, of which ten can be used by seagoing vessels. The size and jetty capacity is unique in Antwerp.

At the moment, the quay can handle ships with a draught of up to 11.3 m, but there are works underway to increase this to 14 m.

Sustainability is a big part of operations at NNOAT. The terminal has a Silver EcoVadis certificate, and currently has a sustainability team looking at operations to see how things can be improved. The team will soon deliver a report presenting their findings.

‘The report will, amongst other things, look at how we handle our wastewater and what we will do about energy. Wastewater and energy are the most important at the terminal, because all our tanks are completely enclosed and vapour is not an issue,’ says de Graeff.

Noord Natie has recently constructed a block train track as part of efforts to take cargo off the road. One train, of between 20 and 30 cars, can be loaded in a single shift. It has been operational since April and the company hopes that it may also help to ease some of the problems faced in the summer, as rivers like the Rhine suffer from reduced depth and draught, affecting barge transport.

There is also a scheme for employees to obtain electric bikes to make it easier to get to and from the terminal without a car.

‘A company like Noord Natie is part of the community, so we’re thinking about the future of the people as well,’ says de Graeff.

NNOAT, like every other terminal, has been affected by the COVID-19 pandemic. Truck loading and product handling declined, but demand for spot tanks increased. NNOAT managed to stay 100% occupied.

‘It was a challenge to all of us to take measures against a possible COVID-19 infection. We are an operational company, that means that our customers still expect that we handle the trucks and vessels etc.,’ says de Graeff.

For the most part it was a case of following the rules set out by the Belgian government. The administrative staff were told to work from home where possible. For the operational staff, for example in dispatch, they had to make sure there was sufficient space between desks and provide alcohol gel and wipes for cleaning equipment and desks.

The biggest challenge came with the truck drivers.

‘Before COVID-19, we would load about 160 trucks a day. That went down to about 120 trucks a day, but still, receiving 120 drivers in eight hours is a big challenge when you have to take care that the drivers also keep their social distance,’ says de Graeff.

Only a limited number of people are allowed in the dispatch office. Drivers are only allowed to enter when their name or reference number is called.

‘We put some signs on the floor 1.5 m apart so they can see what that really is, and we put some tents up to give them shelter while they wait, though thankfully the weather conditions over here have been perfect,’ says Druyts, adding that the company has made plans to construct a permanent cover over the outside waiting area in the near future.

Some of the rules are much less complicated. ‘For those onboard seagoing vessels it was simple – they are not allowed in the terminal!’ de Graeff says. 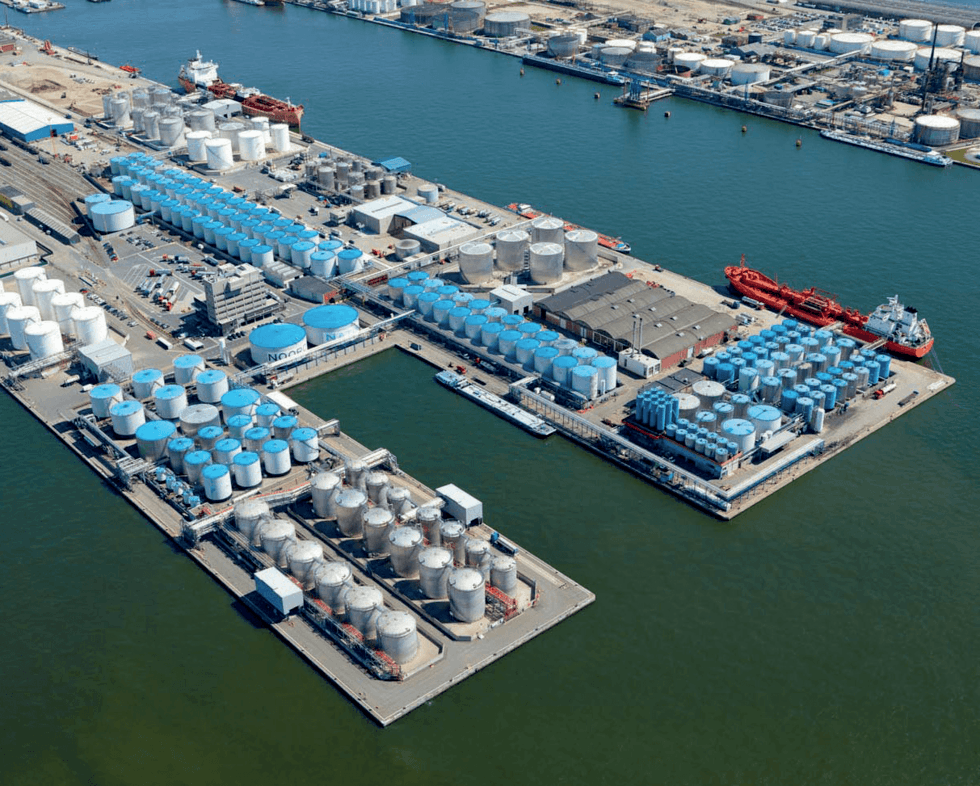 Antwerp is Europe’s biggest distribution hub for chemicals, and the demand for chemicals storage is rising. NNOAT can clearly see the market opportunities.

‘European production of chemicals is declining, it’s not able to follow the growth in demand in Europe, so Europe needs to import more chemicals. Production is shifting towards the source of the feedstock – in the Houston area, the Far East, the Middle East. That means that you have to transport your intermediate and the end product is produced near to the consumer. For our business that’s positive. There will be potential for companies like Noord Natie to attract more cargo flows.’

Noord Natie began expansion work at the terminal in 2010, prior to the partnership with Odfjell. In 2016, it was able to obtain some extra development land from neighbouring terminals, something de Graeff says was ‘extremely favourable’, as the Port of Antwerp is very full and land is hard to come by. An ongoing programme to expand capacity by 130,000 m3, began in earnest in 2017 on the new land. The first part of that expansion, completed in 2018, amounted to 30,000 m3.

‘The new tanks are all stainless steel, with dedicated lines, dedicated pumps and vapour treatment, perfect for chemicals,’ says Druyts. ‘They are fully automated, with temperature control, pressure control, and level control.’

If required by the customer, heating equipment can be installed.

Looking to the future

At NNOAT, further expansions are planned during the next few years, including seven new tanks of 5,000 m. in 2022 and another 116,000 m. of storage following that, divided over four tank pits. Extra loading stations for trucks and railcars will be added as well as a new jetty. Besides these expansion projects, NNOAT still has land available for other value-added projects.

But NNOAT isn’t only focused on expanding, it is also looking to improve existing assets.

‘In Noord Natie is we have two investment programmes – one in new building and the other, which I think is even more important, is upgrading the existing tankage. We have a yearly programme that we take tanks out of service and upgrade them completely to new standards’

This is not a terminal that is standing still.