This article was first published in SEB’s magazine ‘The Green Bond: Your insights into sustainable finance’

Global shipping represents about 2,9% of global greenhouse gas emissions.  Shipping was not directly included in the Paris Agreement in 2015, but the UN International Maritime Organization (IMO) agreed in 2018 a new strategy to reduce greenhouse gas emissions from ships. This strategy sets some clear targets for reducing international shipping’s carbon intensity by 40% compared to 2008 and reducing absolute emissions by 50% from 2008. The strategy also sets out targets for how new vessels should be designed.

Shipping is today the most environmentally friendly way of transport over large distances. More than 80% of traded goods are carried over the oceans. As such, the oceans provide the main transport arteries for global trade. This comes with opportunities and challenges.

The efficiency of maritime transport is no excuse for not acting. To achieve the Paris agreement’s ambitions and the IMO strategy, shipping will need to transform to low carbon emissions, or better, zero-carbon. Sustainability and climate change should be high up on the agenda for the shipping industry.

Sustainability for Odfjell is about acting today for a better tomorrow. It is about having a long-term perspective of our business, from profit, to people, and to the planet. Our 106-year old history, with continuous improvement and development, is probably the best testament to the way we think of sustainability. Sustainability is a part of our DNA.

Efficiency end emission reduction is not only good for the climate but also business. Odfjell has since 2008 improved the fleet’s efficiency by more than 30% and reduced carbon intensity by 26%.

As part of our work to meet IMO targets and meet our ambitions, we conducted a thorough fleet review and transition plan that was completed in 2020 (the Fleet Transition Plan). Based on this plan, we realized it would be possible for us not only to achieve the IMO targets but also to go beyond that.

We decided to set some ambitious climate targets based on the planned technical improvements and retrofits and operational improvements, and digitalization efforts. We want to reduce the intensity by 50% in 2030 compared to 2008, which goes beyond the IMO target.

To achieve a 50% absolute reduction target, we must reduce the intensity by more than 70-80%. We decided then that we would again go beyond the IMO target and set a target to be climate neutral in 2050.

Odfjell has, with these targets, set clear ambitions, with a clear and documented plan to reduce CO2 emission and support the decarbonization of shipping.

The World Economic Forum presented its 16th edition of the Global Risk Report on January 21. Five of the highest risk are related to the environment, where climate action failure comes out on top. Climate risk represents a risk to societies and businesses, and it is vital to act now.

In 2018 Odfjell launched the initial Sustainability strategy under the theme ‘Acting today – for a better tomorrow.’ For Odfjell, setting clear targets and action plans is not only about compliance and continuous improvement. It is also about mitigating risk.

Since 2015, Odfjell has completed the most extensive fleet renewal in the history of the company, transforming the fleet to a more efficient- and more environmentally friendly fleet.

With a modern fleet and clear ambitions to continuously improve to reduce emissions and operate with high standards, we believe this is good risk management for the company for the benefit of our various share- and stakeholders.

Being a frontrunner in sustainability creates opportunities, and because of this, we started looking into how to link our sustainability ambitions and actions with financing.

The process of the Sustainability Linked framework​

The process to link ESG ambitions with financing started in 2019 as we explored and learned about the various KPIs and pricing mechanisms appearing in the early sustainability-linked loans market.

Following the world’s first SGD-linked bond issued by Enel in September 2019, we became more focused on the bond market, and in January 2020, we engaged with SEB and their debt capital markets and sustainable finance teams and decided to move forward with a framework for a potential sustainability/ESG linked bond.

At the time, there were no principles in place for such a structure, so we followed best market practice. When ICMA published its principles in July 2020, we were well prepared. In August 2020, DNB and Nordea joined the team to support the development of a Sustainability-linked Finance Framework, and DNV GL was engaged as second opinion provider. DNV GL has substantial technical insight and was given full access to the fleet transition plan and calculations behind our emission reduction performance and our AER trajectory towards 2030.

Our initial thoughts were to link a broader range of our ESG ambitions in the framework, however the focus soon turned to one climate-related Sustainability Performance Target (SPT).

The SPT is the carbon intensity reduction target, and the KPI is the intensity indicator AER. AER was used as intensity metric as we believe it will become the industry norm and better reflection our operations over time.

With good help from the sustainable finance teams of DNB, Nordea and SEB, and good cooperation with DNV GL, the framework was scoped as a general document, not linked to a single security or type of loan.

Still, a potential bond issuance was an ambition, and this process was run in parallel. The second party opinion from DNV GL confirmed alignment with the sustainability-linked bond principles set out by ICMA and the sustainability-linked loan principles set out by the various loan market associations. Further, it concluded that the target of a 50% reduction in carbon intensity compared to our 2008 baseline is more ambitious than the envisaged 40% reduction in carbon intensity compared to IMO’s foreseen 2008 baseline.

Historical and projected AER trajectory for the Controlled Fleet, indexed

The framework for sustainability financing and pricing mechanism

The sustainability-linked finance framework is a testament to our commitment to deliver on the ambitions set out in the Fleet Transition Plan.

The framework describes Odfjell’s perspectives on sustainability and why we are committed to linking our ambitions with financing.

The framework SPT is to reduce carbon intensity by 50% by 2030 compared to 2008. To allow for shorter-dated securities to be issued under the framework, an AER trajectory was calculated based on more than 100 various energy-saving initiatives planned across our fleet in the years to come.

For the bond issued on January 21, there is a “hard” target of AER performance of 8.18 or lower, to be measured on June 30, 2024 (the Target Observation Date). To ensure continued alignment with the principles and best market reporting practices, Odfjell will also obtain an external and independent verification of actual AER performance and an assessment of the Fleet Transition Plan and its viability, annually and on the relevant Target Observation Date.

If Odfjell fails to meet the AER target and/or fails to deliver the supporting verification and review, there will be an increase in the redemption price of the mentioned bond by 150bps.

The framework allows for various pricing mechanisms. Indeed, a margin adjustment, typical of the sustainability linked loans market, was long considered for the mentioned bond, however a redemption price adjustment was considered the best fit given the four-year bond period and time to implementation of our fleet transition plan.

Work on the framework and second opinion was finalized in November 2020, and a bond refinancing process was being considered in parallel.

As this would be the first sustainability-linked bond in the Nordic high yield space across industries, it was important to engage with investors along the way to get their view on the potential product. Thus, during the framework process and prior to launch, we had several informal meetings with ESG focused credit investors to understand better materiality, requirements, and preferences for a sustainability linked structure. This dialogue gave us valuable input and extra motivation during the framework process.

The bond issue was launched on January 7, 2021, and over the next few days we met with more than 50 investors through global investor calls and one-on-one meetings.

The issue attracted significant interest and the sustainability-link was a key success factor as we saw several new and ESG focused investors, and investors that had been actively reducing their shipping exposure of late, make out a substantial part of the book. More than1/3 of the investors is thought to be entirely or significantly dependent on the sustainability link.

The book opened and closed on January 14, 2021. The total issue size was set to NOK 850 million, the pricing was NIBOR +575bps, and it was substantially oversubscribed. The joint sustainability-structuring advisors played a vital role throughout the process in finding the right balance between our climate ambitions, investor focus, alignment with principles, and legal requirements, and this was well reflected in the final result. 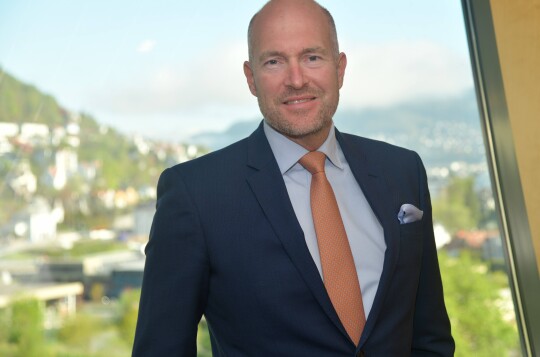 “Odfjell wants to support and be at the forefront of the sustainable finance market developments, including the broader social and environmental progress that this type of financing can advance. We want to develop further the vital role that debt markets can play to encourage companies to contribute to sustainability. We believe that sustainable financing will become the norm of the future with a clear(er) alignment between capital and corporate commitment.”

The bond issue in January 2021 was not only the first sustainability-linked bond for shipping, but it was also Odfjell’s first security issued under our framework.

We are encouraged by the interest received from investors and lenders since publishing the framework and DNV GL’s second opinion and expect to expand our sustainability-linked finance portfolio in the years to come.

Access to capital has always been critical in shipping. Now, perhaps more than ever, it is also key to the decarbonization of shipping.

Odfjell has set ambitious targets to reduce our environmental footprints: We aim to reduce our carbon intensity by 50% by 2030 compared to 2008 levels and have a climate-...

As the first in the international shipping industry, Odfjell SE has successfully issued a sustainability-linked bond. With a tight link to Odfjell's long-term climate tar...

Acting today for a better tomorrow

For Odfjell, the oceans are fundamental to our business, and this year we mark UN's World Oceans Day by launching our Sustainability strategy for the coming years.