On Wednesday, October 4th 2017, Eastman Chemical Company experienced a process startup upset as they were performing an equipment swap in their coal gasification operations at their Kingsport, Tennessee, USA plant site that caused two explosions and a fire.

Eastman’s top priority was making sure that employees, local residents and environment were safe and unharmed. After all safety processes had been put in place and it was established that no one was seriously injured, the work started to assess the operational impact.

It was quickly determined the coal gasification plant, which acts as a feedstock to much of Eastman’s acetyl production at its Tennessee facility, would be out of operation until the end of the fourth quarter.  This would have a significant negative impact not only for Eastman but for their many customers around the world.

“It was apparent that we needed to respond quickly in acquiring the large volumes of raw materials that we normally produce in our plant. And it had to go fast”

Before hours had passed, VP Commercial & Business Development Carl Fredrik Odfjell and President of Odfjell Terminals US Joe Nassif were on the phone, offering their sympathy and assistance – what could Odfjell do to help?

“They reached out immediately, proactive as always”.

Eastman has been doing business with Odfjell for decades, and is a key customer partner in Odfjell Terminals. The company stores bulk liquid chemicals at Odfjell’s terminals in Houston, Charleston and Rotterdam, and ships its products on Odfjell vessels from US to Europe and other locations.

Odfjell Terminals Houston serves as a key third party storage location in the US for Eastman’s production. It acts as the export point to Europe, and to other international export markets for its products fed from their Kingsport, Tennessee manufacturing site.

“We have a valued relationship and partnership with Odfjell, and are extremely happy about the way Odfjell cared, responded, listened and took action in this situation”

Reversing the pipeline in record time

Following the October 4th event, the product pipeline had to be completely reversed from export to import – as quickly as possible.

Odfjell and Eastman took the challenge head-on. In a major team effort, they joined forces and managed to set up an effective operational solution quicker than anyone thought possible when the idea first appeared. Work that normally is expected to take months, was now done in a few days.

“It all had to move quickly, and with the help of Odfjell we had an operational solution up and running in record time”

Within a week, Odfjell engineered and constructed a facility solution that enabled Eastman to reverse the pipeline. Teams on both sides worked around the clock and ran double shifts to get the operations in place as quickly and safely as possible.

“Everyone understood the gravity and the potential impact. We rallied, got our cross functional team together and jumped to create alternate plans that would minimise Eastman’s downtime. It was all hands on deck”

Through the first chaotic days and following hectic weeks, the teams on both ends kept in close contact with a minimum of two calls every day including weekends. The target was clear: Create a solution, implement and execute – safely, on time and on budget.

In 24 hours, Odfjell had a capital estimate for Eastman to modify multiple tank loading and unloading systems by adding more piping and instrumentation/controls to allow for simultaneous loading of multiple rail cars and trucks, to allow Odfjell Terminals Houston – for these large quantities – to maintain essentially a pipeline on wheels rolling into Eastman’s Kingsport manufacturing plant, in conformance with their volume demand requirements for each product.

The project was fully completed, safely and efficiently, in only seven days. Kevin Pruitt concludes:

“This has really been an incredible team effort, showing that just about anything is possible if you set your mind to it. Before this event, none of us thought it possible to reverse a pipeline within this short timeframe. Now, we see new opportunities based on this experience, and the paradigm of ‘that’s not possible’ is left behind. We figured out a way to do it, and this whole experience has shown us the potential we have when the right people work together on a common cause” 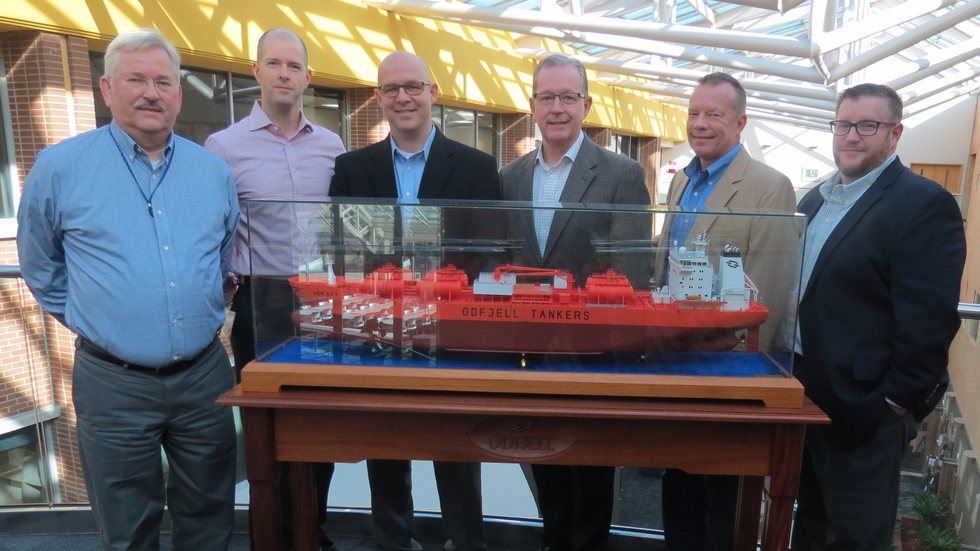 As a part of the long-term working relationship between Odfjell and Eastman, the two meet regularly to discuss status of the joint local and global operations. At the core is a common goal of continuous improvement and of utilizing the close relationship to enable value adding business opportunities that benefit both parties. Key words are flexibility, reliability, operational excellence, and of course – safety.

Nassif underlines the importance of listening to the customer:

“From A to Z, dedication to servicing the customer is what builds greater business and stronger business. What happened here is a testament to that”

“The more you communicate, the better you can resolve issues. We have a valued relationship and partnership with Odfjell, and are extremely happy about the way Odfjell cared, responded, listened and took action in this situation”

About Eastman:
Eastman is a global advanced materials and specialty additives company that produces a broad range of products found in items people use every day. With a portfolio of specialty businesses, Eastman works with customers to deliver innovative products and solutions while maintaining a commitment to safety and sustainability. Learn more at Eastman.com.

Big It Up for Rotterdam

Easy access to capital has brought investment in Northern Europe but Odfjell has more considered plans as it brings capacity back onstream.

Odfjell SE considering a tag along of its shareholding in Odfjell Terminals Rotterdam.