The below is a translated version of an interview published in the Norwegian maritime magazine Skipsrevyen. Written by Helge Martin Markussen.

- No one could have foreseen what would happen when the year started, Kristian Mørch, CEO of Odfjell, reflects.

But one issue was at the top of the list: to keep everyone safe.

- We prepared ourselves for the market to improve and to support our customers. Instead, Corona became the biggest challenge we could ever imagine. We quickly decided that we had to focus on the safety of our staff and make sure our customers were happy. All other strategic matters came second.

But despite all the challenges, the shipping company has seen its best economic results in 12 years.

Did you believe it would be possible to do that well in 2020 when the Corona hit in March?

- There were moments at the start of the second quarter when we faced some scary scenarios. There was a lot of talk about some sort of economic apocalypse, and we feared a situation where we would see our ships anchored and unable to sail. So, we braced ourselves for the worst. However, we have weathered this well, and experienced growth through the year. But there are still many uncertainties, so we are prepared for that. What have you learned from this year?

- Firstly, we have learned that our company is robust. We have good systems in place, and our staff, both on board our ships and at the terminals, are world-class. Despite the challenges, we run our business well, which we have always believed, but it has never been put to the test. Another thing is that the demand for chemicals is robust, and that has surprised me.

Is there anything you would have done differently?

- That is a good question. If you had asked me at the beginning of the second quarter what the dream scenario would have been come mid-December 2020, then I think we are very close. Not because we are geniuses in any way, or because all the decisions we have made have been good. But we have been lucky with what we have done.

The most important thing we did was to focus on running the company well. Of course, had we known then what we know today, then maybe we would not have adopted the defensive position we did. But in hindsight, I do not think we would have done anything differently. We should be pleased that things have gone as well as they have.

One of Mørch’s biggest frustrations throughout the year has been the enormous difficulty in getting seafarers home due to Covid restrictions. When the third-quarter results were announced, the CEO spent a lot of time explaining just how difficult it was. To this day, there are still seafarers on board who have not been home in over a year.

- You can only imagine how difficult it must be to be stuck and unable to leave work for such a long time. The seafarers have been, and still are, under enormous pressure.

In order to get the seafarers back to their home countries, they have had to re-route the ships several times over to achieve that objective. If there is a ship in North-Eastern Asia, the ship stops off in the Philippines to complete a crew change.

- This, of course, costs a lot of money, but we have to do it for the crew. The Norwegian Shipowners’ Association has also established a quarantine center in the Philippines, which has been a huge success. This can now be copied by other countries, such as India. 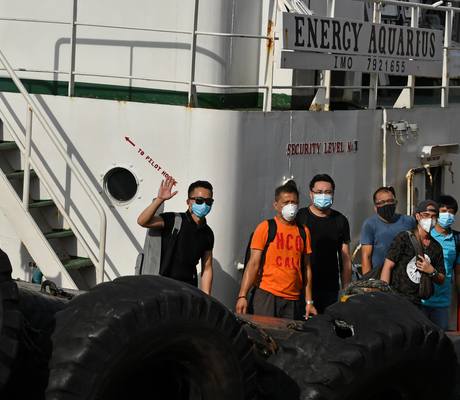 Crew disembarks Bow Sun after the ship was rerouted to Manila for the sole purpose of facilitating crew changes. 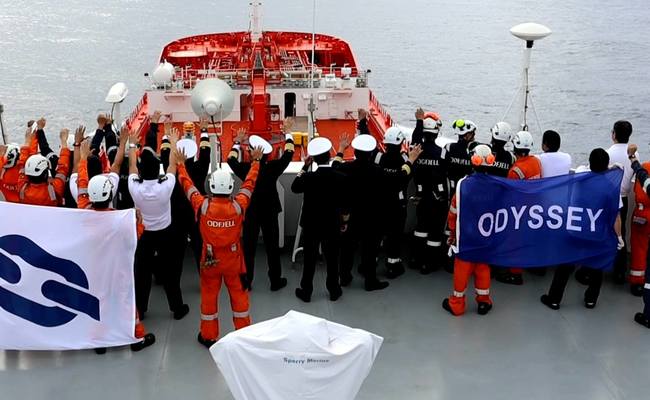 Odfjell'ers on board and ashore marked the 2020 Day of the Seafarer by appealing to governments to secure safe and efficient crew changes.

Praises for the Prime Minister

Kristian Mørch is full of praise for the Norwegian authorities in these challenging times.

- When other industries talk about framework conditions, the discussion often centers on the economy and taxes. But the Norwegian Government, led by Prime Minister Erna Solberg, has really done an outstanding job. The Prime Minister has brought the crew change issue to the attention of the UN, the IMO and the governments of various countries. Also, in countries where we’ve had ships, the ambassadors have been exceptional in terms of helping out. Not only with general crew changes, but also with one-off incidents.

Odfjell had a crew member on board a ship in China who, due to unfortunate circumstances in the family, had to get home to Norway. Mørch says there were no limits to what the Norwegian embassy in China did to help.

- In the midst of all this, there have also been state budget negotiations and discussions about the net-salary scheme for Norwegian seafarers. We have had visits from several politicians, who have listened to our concerns regarding the situation we face. So the Norwegian Government, Norwegian politicians and the Norwegian system in general, have been outstanding in their efforts to help, Mørch says.

- But collaboration outside Norway’s borders has also been good, he adds.

Over the last few months, several vaccine producers have seen encouraging results in their vaccination trials, and several vaccines have been approved. The United Kingdom was one of the first to start vaccinating its population. Kristian Mørch says he is cautiously optimistic.

- I don’t think everything will be back to normal again in 2021. Come summertime, maybe half the Western population will have been vaccinated, and we may have vaccination passports. We will probably not be participating in big events, where 1000 people or more gather at the same time. But that is not the most important thing.

- For us, the most important thing is to get our seafarers home and on board the ships in a safe way, which I think we will manage by the summer. But we cannot get too optimistic.

Odfjell has completed a big fleet renewal program and today boast the most modern and efficient fleet in their market segment. It was a journey the shipping company started five years ago when they were in a challenging situation. The company was not making any money, costs were too high, and they had not invested in new ships.

- It was lucky that this was completed before the pandemic hit. There is no pressure for us to make any big investments or to cut costs. That is behind us now. As such, we are in a position to cater to the strong demand and the challenges of an ever-changing market. Now we are making money, despite the pandemic, and we have the most modern, and most efficient fleet. Consequently, we do not have to make any new or big investments in the coming years.

Due to strict infection control measures around the world, many seafarers have not been able to disembark their ships since the coronavirus pandemic hit. Around 200,000 s...

The global crew change crisis has not been solved, despite significant efforts. To further strengthen the united industry appeal and initiatives, Odfjell has signed the N...