The below is an article from Shippingwatch, published April 9, 2021. Written by Idha Toft Valeur. English edit by L.N. Barnes and Ida Jacobsen.

After a 36-hour flight, Camilla Vambeseth boarded the 180-meter-long tanker in Japan, ready for her first voyage as a cadet.

"At that point, I thought: what in the world have I gotten myself into," she laughs, and continues:

"I honestly can't remember anything from the first two weeks. There were so many impressions. I don't recall anything, except folding a flag. I had never been a part of anything like it."

This is how Camilla Vambeseth, now 24, started her first journey at sea.

She is what shipping companies all over the world are trying to attract more of – a woman at sea.

In a member survey from the Norwegian Shipowners' Association from 2020, it was revealed that only 15 percent of leaders in the maritime industry are women. Among seafarers and workers on drilling rigs, the number decreases further to a mere 7 percent, which is less than one in ten of the employees. 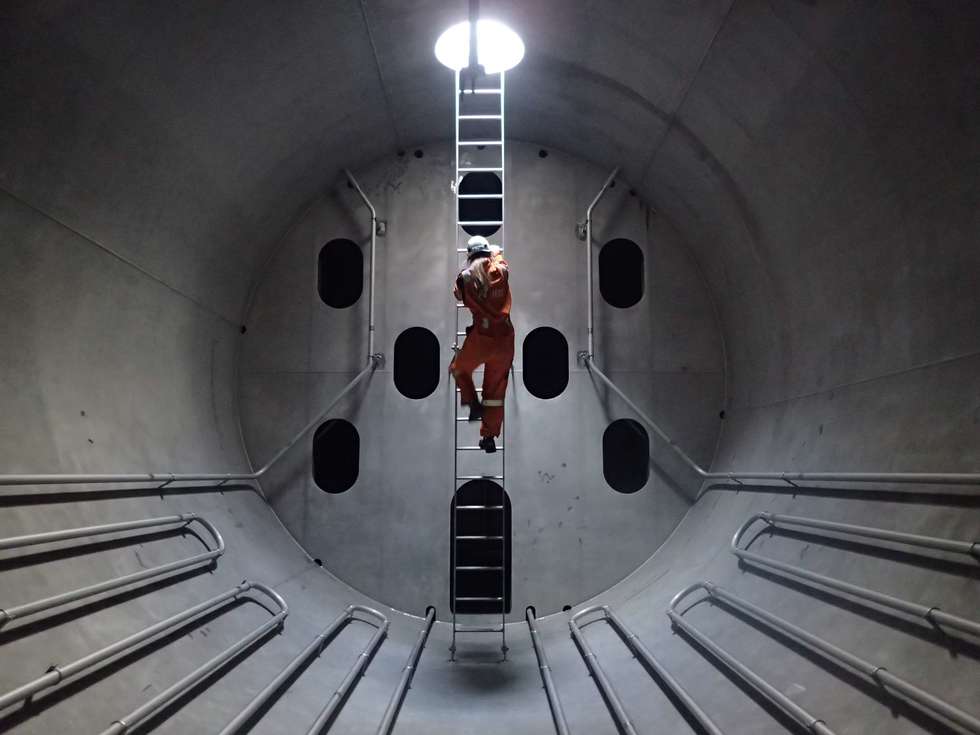 Inspecting a tank on board Bow Summer. Photo: Christian Dahl

When the time came to apply for work places as a cadet, Camilla Vambeseth thought that she should probably apply to Odfjell, even though it was not what she had originally planned.

"I'm the type of person that closes my eyes and jumps, and then I look to see what I'm dealing with. When I opened my eyes again, I was in Japan," she says.

Shortly thereafter, her initial dream of working at Hurtigruten was quickly replaced by foreign shipping and tanker, and this is where she wishes to stay.

The best thing about working at sea, Camilla Vambeseth says, is that you get to see the whole world and that there are no limits to where you can go.

So far, in her two-year career, she has visited places such as Japan, China, Singapore, Malaysia, Indonesia, South Korea, Taiwan and Egypt.

It is a well-known fact that there a few women in shipping, and even fewer on the ships.

Camilla Vambeseth is used to being a minority. During her education at Styrmannskolen in Norway, she was the only woman across two classes, which numbered a total of 50 students.

She makes no attempts to hide the fact that she has experienced awkward and unpleasant situations in her career so far. With that said, she emphasizes that she has had mostly positive experiences at sea, whether that has been as an apprentice, a cadet and now as a permanent employee.

"There have been challenges and problems, that's not something I wish to hide. I had one person tell me that 'now you have to find work on land, Camilla, because I don't appreciate women at sea'. A captain said that to me. It's not something that should happen at all. It's harassment."

She points out that it happened many years ago and not with her current employer, Odfjell.

Later, as an employee at sea, Camilla Vambeseth has learned that it is best to take matters into her own hands when she finds herself in inappropriate situations. 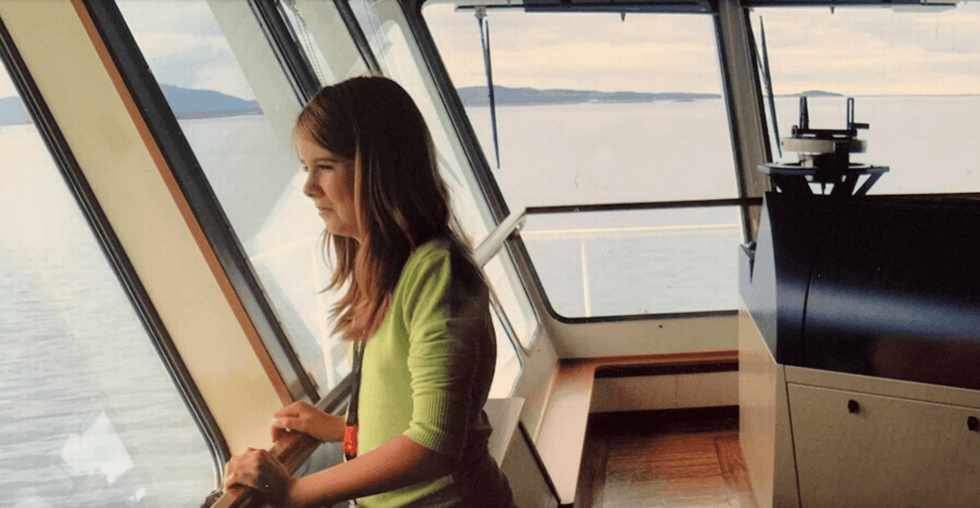 Camilla Vambeseth was introduced to the maritime life as a child when visiting Hurtigruten.

"I've had comments hurled (at me, -ed.), but then I talked to the person and told them that's not good enough," she says, and continues:

"I'm at work, I have to work here, so comments about how my body looks or the like have no place here. And it tends to work out quite well," she says.

Of course, Camilla Vambeseth also believes that if the case is more serious, one should always report upwards. It is important to continue the work that is already underway in the industry, she notes, to create a change of attitude in work environments that are otherwise male-dominated.

She herself has only reported once. As a general rule, she takes matters into her own hands as a matter of demanding respect, she says.

"It's the absolute best thing for me, and for them to gain respect for me, to solve the issues myself."

Although work life at sea is male-dominated, Camilla Vambeseth has known ever since she was little that she wanted to go out to sea.

A visit from the coast guard when she went to primary school in Nordfjordeid in Western Norway, became the start of a dream of working at Hurtigruten, a dream that Camilla Vambeseth's family since cultivated.

Her grandfather was a captain, and her mother's boyfriend was a ship electrician, so he took her aboard ship after ship, including Hurtigruten. Each time, he arranged for a trip to the bridge, and the passion for life at sea only grew from here.

When Camilla Vambeseth talks about life on the chemical tanker, she can't help but smile. It turned out that the dream of Hurtigruten could be replaced by a larger dream of working on long trips abroad.

The tanker vessel she works on board can quickly transition from transporting soybean oil, which people need to "fry their fish in," she says while laughing, to freighting hazardous chemicals. She likes to feel that her day-to-day job is important and that she contributes to keeping the world running on a daily basis.

Vambeseth works on a rotation schedule where she is on board for nine weeks and at home for nine weeks before she returns to the vessel for 11 weeks followed by 11 weeks at home. She prefers the longer trips, because she can then avoid absorbing new information every single time she signs on to a new ship.

View from the bridge underway through the Suez Canal. Photo: Camilla Vambeseth

But when the sea is your home for close to half the year, one would think that the feeling of losing out on events at home with family and friends be a little tough. That is not, however, the case for Vambeseth – she actually feels the opposite because her life allows her to focus completely on her family and friends in the weeks that she is home.

Additionally, it helps, as she puts it, to have a "gang" on board that she loves.

Another positive thing is the fact that Odfjell, like Maersk Supply Service, always tries to deploy women in pairs. Aboard her chemical tanker Vambeseth’s chief officer is also a woman.

She adds that more women would of course be great, seeing as the journey as see is so long. And she definitely thinks more diversity on board is good for the environment.

Vambeseth envisions a long working life at sea and sees a rather clear career trajectory until she one day holds the title of captain. Right now, though, she is pleased with where she is. Both in terms of her job tasks, her place of work and the people she spends weeks at sea with.

As one of the 7 percent of women at sea, she thinks it is necessary for the industry to hire more women. If not at sea, then on shore. It would be positive if more women started seeing the maritime industry as a potential career platform. And for this, it is incredibly important that kids be exposed to the industry and all it has to offer, she says.

When the calendar returns to May 1, it is time for Vambeseth to be rejoined with her "gang" at sea, and within comes new adventures for the third mate. And yes, it may seem a little odd that a woman’s title references the opposite gender, traditionally.

But it would be taking things too far, she says when talking about people arguing that a new title for seamen should be "seaworker".

"I'm a seaman. I'll never start saying that I'm a sea worker, just to get a gender-neutral title. I'm a seaman, and that's how it is."

Read the article on Shippingwatch.com.

Reaching career goals in the country of her dreams

After falling in love with Bergen on a sunny day at Bryggen, Yoana León Valdivia knew that one day she would be back – to stay. Sure enough, four years later she quit ...

Odfjell has set an clear target to increase diversity within the shipping shore organization: We aim to reach a minimum 30% gender balance, at all levels, by 2030.