It was the Easter week of 1942 and the weather forecast predicted snow, heavy fog and high waves. A bad forecast to set sail, but a good forecast for the allied forces' plan: Outmaneuver Nazi patrols and move ten merchant ships from Sweden to Scotland. The operation was named 'Performance'. The ships were stacked with vital war material and a total of 471 crew and soldiers.

The ten ships left Gothenburg as the heavy fog rolled in. In Skagerak, a fleet of German aircrafts and 24 warships, including three submarines, were gathered to intercept. Knowing what lay ahead, all the merchant ships had been equipped with machine guns and explosives. Machine guns to respond to attack, explosives to sink the ship if an escape was impossible.

They all knew the risks:

"We take a risk. We know that. But so what? If it ends well, these fine ships will contribute to the allied fight, and the cargo provides essential war material. Naturally, it is our duty rather sink the ships than allow them in the hands of the enemy. All is prepared – as I know you want it. If the enemy attacks, remember this: For our loved ones at home and our compatriots, the simple truth will prevail: That we fought for Norway's and the United Kingdom's honor and freedom." 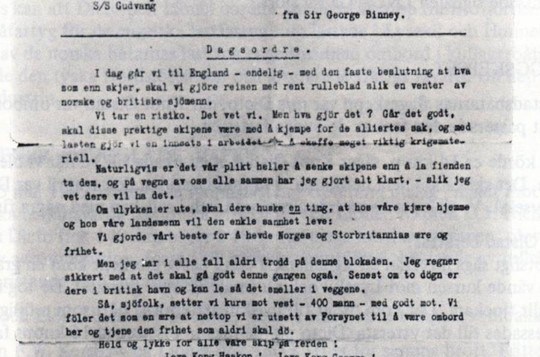 The ship that beat the odds

The operation would later be described as "the tragedy of the Kvarstad ships." Of the ten ships, two were stopped before getting to the open seas. Six sank during crossing after Nazi attacks. 19 men perished at sea, 227 were captured by the Germans, and 43 later died in Nazi concentration camps.

Only two ships made it to shore: B.P. Newton – and Odfjell's M/T Lind.

At the helm of the small Odfjell tanker stood Captain Hans Anton Trovik, joined by his crew of 12. He had been sailing with Odfjell since 1926, and his experience should prove invaluable in the extreme passage.

The ship was small and slowest of the lot. The waves were high, making Lind hard to spot for the German naval vessels and air patrols, and Captain Trovik managed to avoid them – until Maundy Thursday, when a torpedo aircraft attacked.

By what is later described as "exceptional" maneuvering, Lind escaped the attack by a hair's breadth, and responded with machine guns. The aircraft attacked again and released torpedoes only 500 meters from the vessel. As luck would have it, both torpedoes crossed right under Lind's keel and did not explode. Lind escaped, with a ship side drilled through by 15 bullet holes.

On Good Friday, Lind reached the UK shore, and was guided through the minefields by the British navy. Captain Trovik and his crew finally reached safety in Methil, Scotland, Saturday, April 4, 1942. 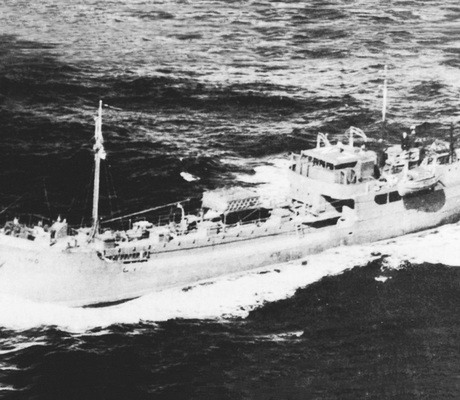 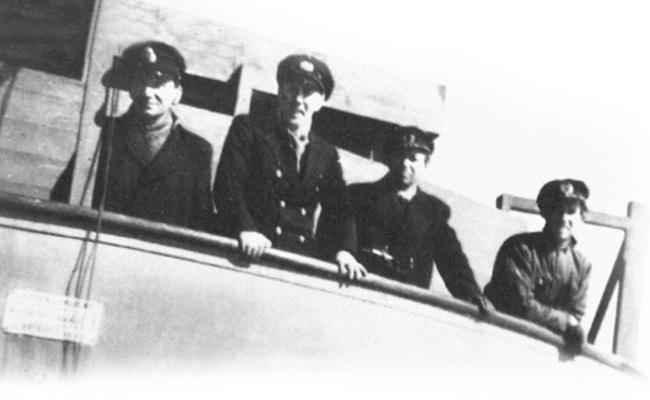 From the bridge of MT Lind. Captain Trovik (second from left) together with three of his crew members.

Captain Trovik was one of around 30,000 Norwegian sailors in the merchant fleet during World War II. Their efforts secured supplies of vital goods in critical times for allied warfare.

It came with a cost: 500 Norwegian ships were lost at sea, one in ten seafarers never made it home. Trovik alone was on board Lind for nearly six years running, from 1939 to 1945. By then, he was relieved on account of exhaustion.

As a recognition of his remarkable contributions and sacrifice, Norway awarded Captain Trovik the War Cross. This is the highest-ranking decoration given by Norway to a citizen, and is awarded 'extraordinary brave actions or extraordinary leadership during combat'. The War Cross is awarded to 148 Norwegians only (of which 19 from the merchant fleet) from World War II. Trovik also received the Norwegian War Medal and Lloyd's Medal for Meritorious Service, while Great Britain named him Officer of the Order of the British Empire. 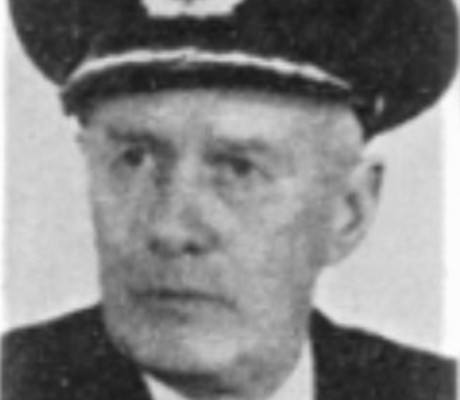 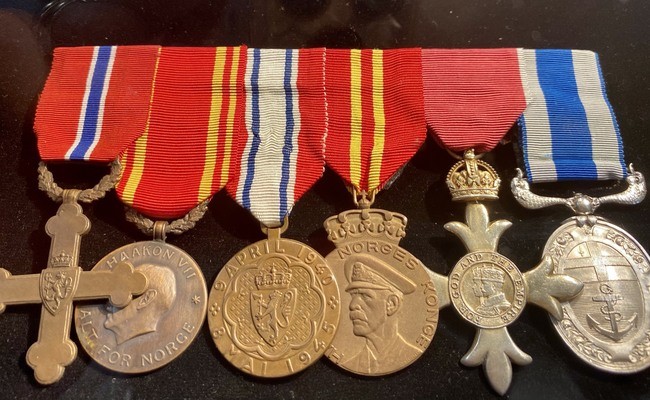 Honoring the heritage of the merchant sailors

Erik Hjortland, Odfjell's VP Technology and war history enthusiast, is the prime driver behind Odfjell's initiative to honor Trovik and the merchant war sailors at the company headquarters in Bergen.

"The courage and contributions of the sailors in the merchant fleet cannot be over-estimated for the Norwegian exile-government’s political influence, for the allied victory, and the rebuild of the country post-war. This is an important part of our collective memory. I hope that the story of Lind, Captain Trovik and his crew can inspire generations of Odfjell'ers at sea and ashore – and remind us that while focusing on what lies ahead, we must never forget that we build on a proud maritime tradition."

He is supported by Associate Professor Frode Færøy at the Norwegian Resistance Museum: "The efforts and resources that were put into action on the Allied side, and which included almost 1 100 ships and about 30 000 crew members, were the largest and most valuable Norwegian contribution in the worldwide struggle against Hitler-Germany and the other Axis powers. I commend Odfjell's decision to honor the crew of Lind and the war sailors." 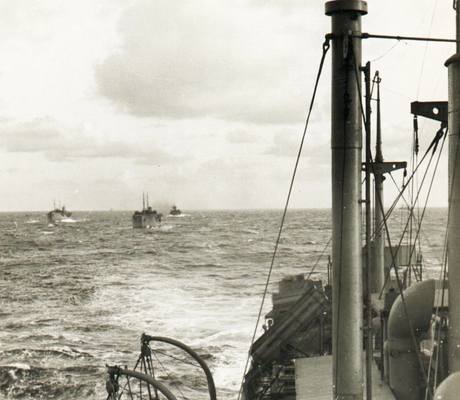 An allied convoy in the Atlantic during World War II 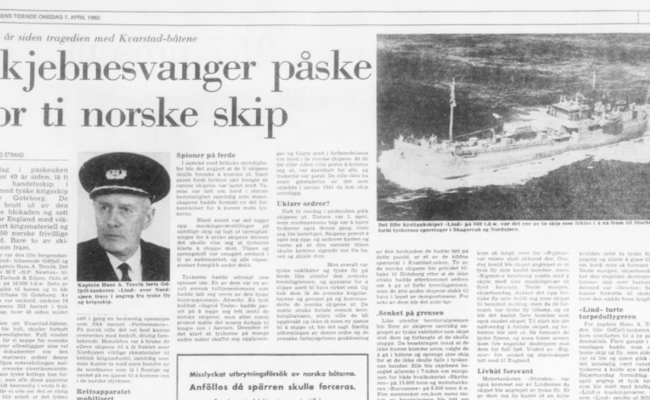 "Captain Trovik and his fellow merchant sailors deserve our highest respect. They conquered great dangers as civilians through the war, and their maritime competence is beyond doubt. It is a great initiative to share their history, courage and contributions with new maritime generations," he said.

At the venue, Trovik's medals are displayed together with news clippings and a photo of Captain and crewmates at the bridge of Lind. Historical documents from the operations, complete crew lists and Trovik's Nortraship file from the National Archives are safely stored in the medal cabinet.

"By recognizing the history of Captain Trovik and the Lind crew with this installation at the Odfjell headquarters, we hope to pay our tribute to all of Norway's war sailors. Their courage and sacrifice must receive due attention and never be forgotten," said Laurence Odfjell, Chair of the Board of Directors. "Odfjell has a more than 100-year history. We are who and what we are today thanks to the many brave and skillful acts of our seafarers – this is our living legacy."

When sailing into UK waters on Good Friday, Lind was met by British destroyer Wallace. The Captain's on the two ships greeted each other heartily: On Lind, the conscientious Norwegian sailor who had just beat the odds in the most dramatic crossing, and on Wallace, the 21-year old Philip Mountbatten, Prince of Greece and Denmark, later to become Duke of Edinburgh as Queen Elisabeth's husband. Seamanship knows no borders or class.

See video from the exhibit at Odfjell’s headquarters:

Awards:
War Cross
Lloyd's Medal for Meritorious Service
Officer of the Order of the British Empire